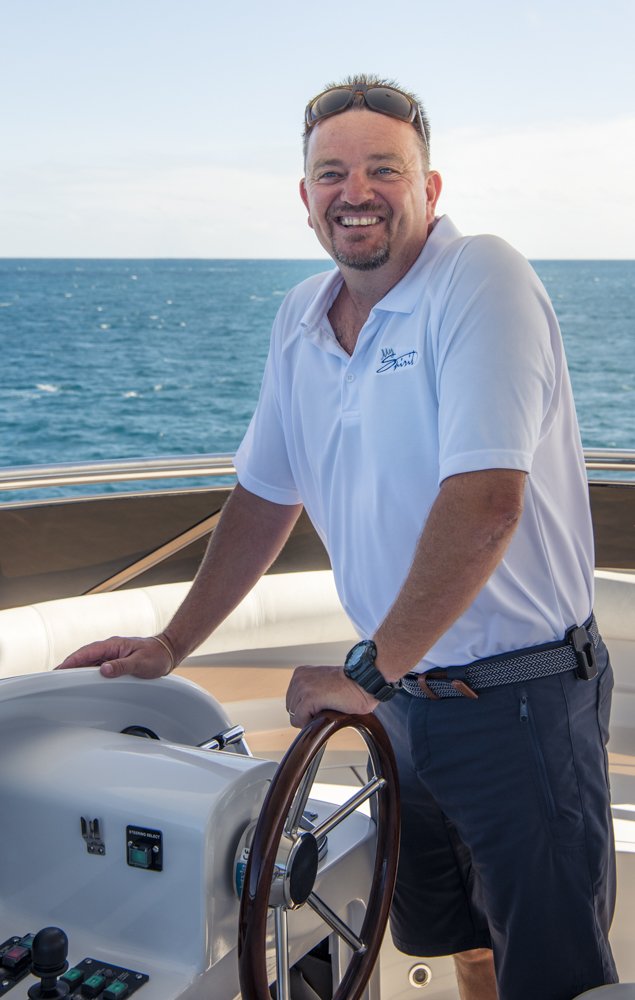 Like a lot of kids I had always dreamed of becoming a pirate. I have been lucky enough to be able to make my living on and under the ocean which I think is close enough to realising that dream.

My yachting career really started in Israel around 1990 where I also met my wife who has been my soulmate (and Chef) for the last 29 years. I made my way to Eilat from London and with the help of a good friend secured a job on a day charter yacht. From there I learnt to dive and within a few short years was working on a long range high end live aboard dive charter yacht chartering from Israel through the Red Sea to Kenya. The first 10 years of my yachting life were spent roaming the Red Sea and the Indian Ocean. To say it was challenging, incredibly exciting and often downright scary would be an understatement. I can honestly say this period in my life shaped my yachting career, and has helped me deal with the myriad of problems you encounter when running a Super Yacht in remote locations with limited support.

My lucky break came shortly after I had signed on. We were tied up behind a small rock in Yemen waiting out a storm and received a May Day call around 2 am from a small motor yacht which was sinking. Myself and the First Officer attended and rescued the 7 crew, we received a payment from the insurance company which was just enough to pay for our Yacht Master courses. A while later we also received an Award of Plate as it is known from the Department of Transport for ‘Bravery at Sea’.

From the Red Sea we then moved to Baja, Mexico spending time mainly in the Sea of Cortez which was fantastic, running a yacht for a Mexican family often chartering for the Rich and Famous which was very interesting but a little tame. A few years on and it was time to find something a little more exciting.

After completing my Master 3000 GT at Warsash Maritime College we travelled across to Ft Lauderdale and within a very short time secured a job working for an American family running their new to be globally based Super Yacht with the focus being on Marlin fishing and diving around the world. Yes these jobs do actually exist…..

Two circumnavigations and 12 years later we decided to stay closer to home. I now run and manage My Spirit and Spirit Luxury Charters. Based out of Cairns in Queensland, Australia we have the most amazing cruising grounds on our doorstep. Papua New Guinea and the Solomon Islands are our regular haunts and they offer some of the remotest pristine cruising grounds that the world has to offer.

In order to navigate through the constantly changing circumstances encountered running a yacht, you tend to learn very quickly that there is only one way to do things, whether it is taking care of your guests, planning refits and maintenance on a strict budget or training and supporting you crew. Everything has to be done safely and to the best of your ability.