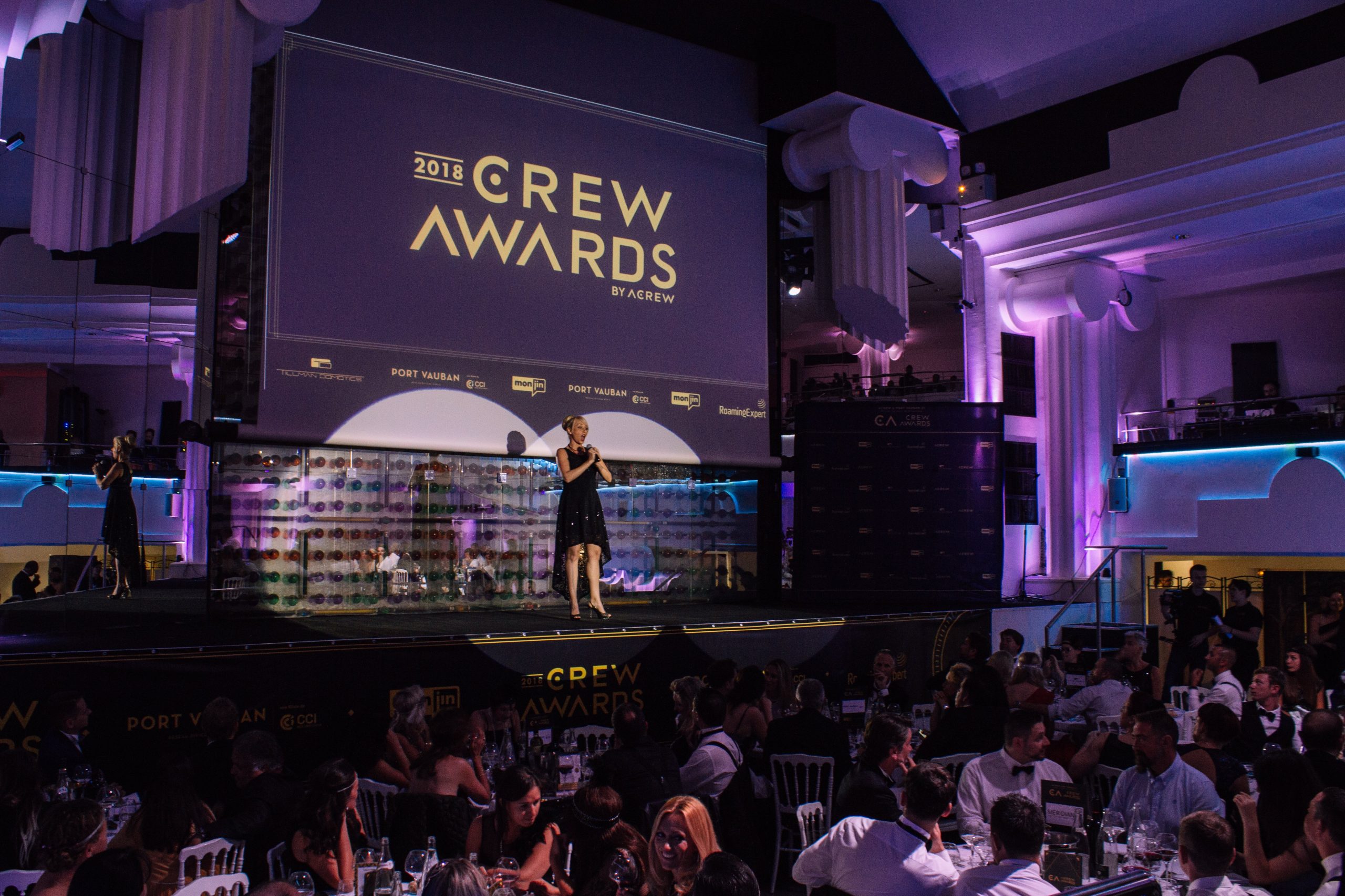 The much anticipated Crew Awards from ACREW took place at Le Palace in Nice on Saturday 13th October in partnership with Port Vauban.

275 guests, made up mostly of captains and crew, joined the ceremony to recognise exceptional crew in superyachting. The celebratory atmosphere was inspiring and the support from crew for their peers was remarkable.

Captain Todd Herman from La Tania commented afterwards “I felt a great sense of pride and honour to see my team recognised as the best charter yacht crew. They worked extremely hard and are well deserving. ACREW did an amazing job organising the event. It’s great for our industry and I have no doubt it will be a premier event on the yachting calendar for years to come.”

Every award announcement had the audience on the edge of their seats. The winners were met with loud applause and received their awards with pride. ACREW is honoured to recognise and celebrate every single nominee, finalist and the final winners, throughout the rigorous process that lead to this ceremonial event. Heartfelt thanks go out to every member of crew that took the time to recognise the brilliance of someone they work with.

Captain Avnish Dhall from sponsors Monjin and Crew Match enthused “We are proud to celebrate the talent and skill that drives all yachting crew towards excellence. The Crew Awards from ACREW provide a significant step towards this well deserved recognition.”

With over 10,000 votes over 3 weeks in August, the awards are the first to truly reflect the voice of crew. The 17 winners, as well as the 200 nominees, deserve to be held as aspirational figures for new crew and any crew wanting to make the most from their career onboard yachts. Roger Horner, Group Managing Director e3 Systems, emphasised this in his words when announcing David Honeybun from MY Gene Machine as the winner of the Engineer & ETO Crew Award saying “In our business, the Chief Engineer and the ETO are as important to the yacht as the water it floats on! As such they need to be recognised.”

Award presenter Norma Trease, Board Member at Yacht Aid Global congratulated the winners and the event; “Accolades to the seventeen fantastic winners of the inaugural ACREW Awards – well deserved recognition for Yachts and the captain/crew who make it all possible. Bravo to the entire ACREW team for pulling off a stunning event evening so much enjoyed by one and all!”

Barbara Clerc, Chief Officer at MY AWOL added “I am very happy and proud to win the Sustainability Crew Award. You could say that this is perhaps most precious award because it is not just about our job but a global way of life. Our first boss is actually the sea: so we need to respect her and take good care!”

Holding the Crew Awards in the South of France was important to ACREW and Port Vauban; a fantastic and natural partner for such a prestigious event. Guests arrived suitably attired in 1920’s style formal wear and enjoyed a three course dinner throughout the evening. Exceptional vocalist Kylie Watt, no stranger singing to audiences of over 40,000 in venues such as Sydney Opera House, had the audience spellbound with her performance of Skyfall.

There are too many specific moments to recount but one noteworthy moment was the final award of the evening, announcing the best overall Charter Yacht Crew. The entire crew of winners La Tania hooped, hollered and embraced on stage as worthy winners.

The winner of the Captain (Master Unlimited) Crew Award was Rafael Cervantes Mataix, MY AZTECA. After the ceremony Rafael told ACREW “It is clear that there must have been a tremendous amount of work going into the organization of the event, everything went like clockwork. Congratulations ACREW should be proud of getting it so right the first time around.”

Thanks and respect go to all the sponsors of the event for recognising the importance of these awards and making the event possible.

Special thanks go to:

And to all our Award and Table sponsors for their invaluable support!

Also thanks to the superyacht artist booking service Majestic for supplying superstar DJ Dani L Mebius for the afterparty!

Managing Director Mark Pattman of RoamingExpert shared his views after the event. “We were delighted to be a sponsor of the inaugural ACREW Crew Awards. It was a really well-run event and a fantastic night was had by all. Looking forward to next year’s event already!”

ACREW sincerely wishes for the Crew Awards to be a vehicle for recognising those that inspire. The ACREW team are always blown away by the professionalism, kindness and enthusiasm of the crew that attend their events every year and feel thoroughly honoured to be able to organise this event. ACREW Owner & Director Abigail McGrath reflects “These awards are the crystallisation of my long held belief in the professionalism of crew and our commitment to their professional development. Standing on stage alongside fellow Owners & Directors Onno Ebbens, Paul Evans and Dave Micallef to welcome the first crew finalists and nominees to the ceremony was a pivotal moment never to be forgotten.”